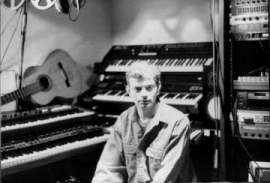 The owner, Dave Forward started work on the private studio in 1987. The same year he became keyboard player with a local band known as Landing Party. It was with Landing Party that he had his first professional recording experience and was hooked. Together with a friend of his, Jon Dean, he set up a duo called Hal. He left Landing Party two years later in 1989, and it was between 1988 and 1994 that the studio was slowly built up. After much redecorating, wiring and fixing of equipment, it was ready for use.

As Hal, the duo wrote and recorded their own songs in the Basement on a Tascam Portastudio (4-track). Jon tended to write and play the guitar, while Dave sang, played the keyboards and operated the mixing desk.

It wasn't long before Dave and Jon widened their talents- to record local artistes and give them a chance to get their music heard.

The 4-track Portastudio was upgraded to an 8-track machine giving much better quality on ½" tape and in 1993 the studio was again upgraded. This time the upgrade was to 16 track using 1" tape. The desk was upgraded to an Alan and Heath Saber console offering up to 54 channels at mixdown. Cubase sequencing was set up on a PC and an Akai CD3000 gave the studio an enviable library of sounds.

In 1994, the duo were given the opportunity to write the musicical score for a musical. Thirteen songs were planned, and this project is still on-going although most of the recording has now been done. For more information about this, please check out the 'Whitby Dreams' web site at http://www.basement-studio.co.uk/whitby/

Jon now lives too far to continue Hal with the same zest and commitment that the two had put in at the beginning. Dave has other commitments too, as he has a full time job running a computer network and a record deal with Synthetique Records as part of 'Escape'.